Planning permission was granted in September 2007 to build a 53 storey tower, the Beetham Tower, at the junction of Blackfriars Road and Stamford Street on the South Bank in London. The development of the Beetham Tower in London is going to cost £1billion. 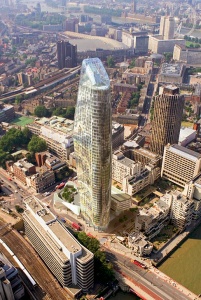 The Beetham Tower in London, will be the home to 64 luxury apartments and a 261 luxury hotel which will be operated by the Jumeirah group. It’s not only the super rich who will benefit from this development as a public gallery will be created at the top of the building. This gallery at the very top of the tower will offer outstanding views over London.

Simpson’s original proposal for the tower at 1 Blackfriars Road was for a 200m tower with 68 stories. These original plans were changed following protest from various parties including local residents and the English Heritage. Plans were granted were for the construction of a 173m tower in 2007 and the construction of the tower will soon commence.

The site where the Beetham Tower will be built has already been demolished, and the construction of the tower will begin in 2009. It is hoped that the tower at 1 Blackfriars Road will be complete in time for the London 2012 Olympics.

Book your stay at the Hilton Hotel in Manchester today